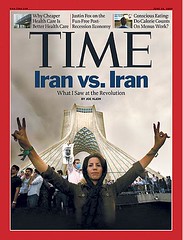 As soon as I heard one of the journalist ask the Prez during his news conference what his thoughts were on the video… so I'm thinking to myself, how bad can it be? Well, it's pretty sad to watch a person's soul leave her body and that's what the video is all about. There is no stop action footage of the impact the bullet takes on a bystander, just a woman collapsing in the arms of whomever happened to be there with her at the time.

I don't watch this thru peeping eyes. However, jumping into the shower to get ready for work, I find myself torn about this complete stranger for whom a poor woman is sacrificed for the sake of a profound political rally. Certainly, she was loved by many people; she wasn't bad looking at all. A target from a jealous former lover? I wonder how a gun wielding law enforcer chooses his victims.

It reminds me of a book I saw on display at BN Censoring an Iranian love story, something I'll never be able to get into. I require commercialization in my story structures. Perhaps if I were to relate the shooting incident with today's reality/game shows I could muster my way thru it. And will we see this footage on TV? Probably not. What about cable? Probably not. HBO? Not.

When I was little, I took comfort about my name being so similar to the first invention to the camera, d'aguerre-o-type. Now I take refuge over the fascination it's sound to Alighieri. It's that vivid imagination of mine that allows me to think this way. It is the paranoid schizophrenic way. The other day, I was stopped at a light and BOOM! somebody crashes into my car. When I ask why he did it, he says he had an important call to make on his cell. Likely story. I think it was thru vengeance that somebody close to an ex decided to teach me some manners.

Why do I think that? Well, the guy's name is middle eastern and that's where the war is currently. Sometimes I wonder if American's wouldn't realize that the invasion has already begun before it's too late.

Some of the cars I see on the street are worth more if they are demolished. That means, one might spend more on that car buying gas to commute to work and up keep maintenance than they would if they commuted by bus. If you keep that in mind, what's to stop haters from crashing into your car? Although this kind of thing is far from comparable to Neda's video, I have to wonder what exactly I'm so thankful for when I come home from work and comfortably sit on the sofa in the safety of my house to watch the news that won't even air the gory details of such a shocking revelation.¶¶¶