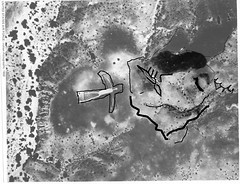 I'm just barely getting used to the way the English language loves humiliating persons who use it in speech or print. Example: we've all probably heard the British expression of "loo" in reference to a lavoratory (bathroom), but unless the correct spelling is known, foreign users of the term might lean toward pronouncing it "lew" or "lou", not that there's much of a difference in phonics. In the information age we live in, and of dawn of multi web accounts, the use of passwords seem to be getting more sophisticated at the expense of alphabetical symbolism. In other words, texters familiar with leetism have borrrowed the practice to help memorize their passwords in a mneumonics kind of way. So, if a person began to get paranoid that people might figure out what his or her password is, he or she might be impelled to jumble their password with numbers. Keeping this in mind, a password for the name "Gordon-Levitt" might end up looking like "60rd0n-13vi++". Why? because the number 6 might pass as the letter "G", and a zero will always pass as the letter "o". In some fonts, "L" for lion could be confused with "I" for igloo, as well as the number 1. I forgot to mention that symbols can also be used interchangably. For instance, @ for "a", © for "c". I like using the number 4 for "A" myself. I can't begin to describe the problems I've had with program language hacking when I can't decipher an "l" for a number, or the infamous zero for an "o".

Given that the practice of combining letters and numbers for passwords is the preferred method, and there's literally millions of web sights that require registration for their users, how can anybody not be expected to create an ultimate password, like PQ2v2izzG, and use it for everything they do on-line, like blogging, banking, shopping, etc. It's also good practice to change passwords on a regular basis, so either way, a person who uses the elite system for a single password, distorted alpha-numerically/symbolically, for all their on-line ventures, a person could get used to writing in l33t. Using acronyms and abbreviations can become a habit. Text–messagers are already doing it.

One of the trailers for a movie I went to see was called 5k da/s. I'm really anxious to see this flick. It's catch phrase is "this is not a love story…" and with that, you should be able to decipher the abbreviations I used for the title without making a feelbe effort of plugging "5k da / s" into imdb. Sadly, however, I have to wait patiently 'til 17 July to see it. Other than that, FINALLY! I have something to look forward to going to see, as nothing I've been to since Revolutionary Road impels me to share my confessions.