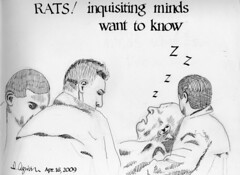 I saw a funny movie today. It's about a mall cop who has secret desires to become a law enforcement officer, and yet, I'm not too sure if the act he puts on for a detective isn't really him being sarcastic about the whole police scene. I don't think I'll ever be able to get Ray Liotta's exposed brain from his role in the Hannibal movie out of my head whenever I see him, and considering he does have a few good movies under his belt, the Rogen actor has his hands fool and totally blows his chances with Anna Faris when he lets the rage of jealousy get the best of him.

Anna has some close-ups in this film and she manages to pull off the sexy funny girl. There's more to clear skin and voluptuous bods when it comes to drooling over an actress, and it seems Anna is selecting her roles carefully so that her best side shines for the camera. Personality is the new hot.

Just as the mallrats can't get out of their head the vision of a pervert in a raincoat exposing himself to them, I couldn't help thinking of the DVD I saw yesterday, The reader. Guards who follow orders seems to be the topic of the ninesy's. Whether it be security guards or concentration camp guards, the transition of having watched two films with completely opposing viewpoints back to back, then seeing a photo in the Times of some guy named Demjamjuk, really got me thinking about what the similarities linking all three subjects could possibly be. Well, if you look carefully at the illustration of the photo from the Times, the guy who slightly resembles our prez seems to be positioned just about where the gasping for air dude might have an erection. The film Observer & report is all about dicks as the flasher dude does the best job of running through a shopping mall in full view of the extras stationed everywhere in front of store fronts, with nothing more than sneakers and a trenchcoat waving in the air like a cape. And finally, in The reader, it is the life of a destroyed man who can't quite come to terms with his reality of having entered an affair "head" first.

I enjoyed watching these two flicks. It didn't matter that one pokes fun at the other's tragically serious subject. What I can't get over is my manner of going out for a bite to eat, picking up some thongs, for my feet, and rushing to the theater for the film before it starts; then, afterwards, making my way back to the parking lot without even a second glance at all the beautiful people who do their thang at places like Hollywood & Highland. If that kind of behavior isn't robotic and brainwashy, then I would hate to think how and why the rumors of the state of Texas wanting to secede from the union is being met with discontent and opposition when, normally, if one expresses their displeasure over a country to a person who happens to be a patriotic countryman, the countryman responds to the hurtful remarks by saying "You're more than welcome to leave my wonderful country, sir."