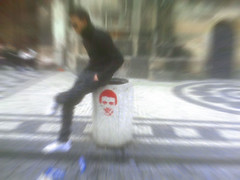 Time mag printed an article in Joe Klein's column† address the controversy over legalizing pot. He has a different perspect on getting high legally. It's not always about teens, which goes to prove my point that if pot was legalized, would I want to take up a new vice after being clean for so many years? It's not all fun and kaleidescopes anymore, it's about the pain. It would be nice for a change to eat the healthy foods my doctors recommend with a little help from THC, wouldn't it? Uh-huh. Yes.

Another film I did not go see, until it aired on cable, is Smiley face. Pot's all about the young people, but if I oversee the hippocracy blonds possess to be attracted to one, it would be Anna Faris. She is the embodiment of Cheech & Chong in her role as Jane F.

Now that I've been formally introduced to the art of Anna Faris, I'm going to want to get a better idea of the other movies she holds major roles in, like May. OMG, I didn't make the connection until I saw it listed in her filmography. She was the lesbian working behind the check-in desk at the veterinarian office who flirted with May and left her for some leggy fox.Anna will next be in Observe and report this Friday. Woot. But she is only playing a bit role. Her leading roles are in these titles:

† It's high time. Legalizing marijuana may be politically risky. But the economic benefits are becoming difficult to ignore
Tags: movies, rem
Subscribe