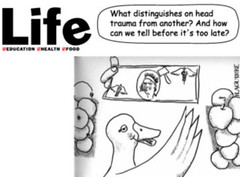 This movie was so much fun to watch. I mean, it has everything a boy could dream of, except for the doctor visitis. When a family move into a new home, the sick member of the family is given first dibs on which room in the house he wants to be his own. Of course, he chooses the basement. He's no fool. If he's as sick as he feels, and at an age when his hormones are playing tricks on him, then he's going to find the easiest way to sneak out of his house at night to rendezvous with the other half of the population. One thing, though. There is a scene where a game of hide n seek is being played and one of the kids makes her way to the attic. Ooh, scary. But even though the attic is dark and dungy, it is miraculously dust proof. Maybe the fact that it's a child actor who is handling the scene and nobody really wants to run a risk of a lawsuit for possible breathing problems when magic dust is set airborne, but the background music by itself doesn't cut it for me.

Is this why I rather watch R rated films? No, R rated films also have the same careless direction in special effects, just nudier. I didn't like this film because it has a happy ending. I can't stand happy endings. Why? because I get comfort convincing myself that a movie ending on a sad note means somebody out there is more miserable than I am. If necessary, and I can do this myself, stop the film abruptly after 4/5ths of the film; or I can just walk out. Some people (movie fans) can hang out at theaters all day, sneaking into various flicks they hadn't paid admission for, but because I tend to feel guilt ridden (as if), I lie to myself and I can't be wasting my time on my ass for more than two hours at a time. Heh, the funny thing is, I only go home to do the same thing in front of the TV.

There was a fight last year I just now saw. I'm not much of a fan, but when I saw that the match was for the belt between a Mexican and a Romanian, of course, I'm going to side with the Mexican, even if he does look weak. I tell myself, he's got big balls to stand in the ring for 12 long round with a giant like that, but guess what? The bout took place in Canada, where the Romanian has made his home and kicked just about every Canadian boxer there is for the belt, and Logardo (something like that) Andrade pummels him to the ground in the twelfth round. Wow! Fantastic. Andrade lost the fight, but it's just as well. Being welter-weight champion (or whatever) of the world only means that every bad ass boxer in town is going to be focused on you. Studying you on TV and soon enough going to kick your butt.Maybe Librado Andrade was handed the raw end of the deal between his fight against Lucien Bute in 2008, but he really took Lucien to the cleaners. If you haven't seen this fight, man! you gotta find somebody who has a copy.