Don't fucking blog at me! Please. I don't do that. Let's stick to… 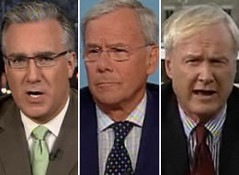 It just sounds like supporters of Chris Matthews who agree that citing blog gossip for Catherine’s presumed love affair is nonesense are also supporting the invasion of America’s privacy. It’s one thing to have rumors strewn around on a blog, but quite different if an investigative journalist is behind the so-called rumors.

Darsan54: To be fair, in this context, Matthews is correcvt. When you make accusations of affairs or other illegal/unethical behavior, objective evidence of some sort should accompany it. §.

I’ve read comments about the unethical deed involved in having an affair, but these days it seems Americans aren’t expected to make their marriage last without satisfying some sort vice outside his home. I’m not sure ethics applies to rumors about somebody’s private affairs if that person happens to be running for public office. We would be turning a blind eye if we didn’t acknowledge that electing a homosexual as president would largely be defeated by the first anti-christ available. Just like some people might be for or against “pro choice” candidates, an affair can allude to pro marriage or against faith ideals; so of course it matters that Caroline may have had an affair.

PAposter: If there’s a story, a journalist should find it, if not, let the Bloggers do their thing..

So, my take on this reply by nolabels sounds like rumors received from bloggers are worthless as bloggers don’t have rights to spread rumors, let alone exchange their opinion of what they’ve heard.

nolabels: Yes, quoting comments on blogs isn't good journalism (well, some comments) but she clearly stated that she was repeating rumors and presented the information for what is was - speculation. Would this stuff fly on Charlie Rose or Bill Moyers? No. This is HARDBALL though. The rules are different and as long as the right disclaimer is made, I don't think it is an issue. §

No one has confirmed and, not publicly at least, the affair issue, but that certainly is out there.

The affair question. I believe that was the question? There’s some personal questions about relationships that are surfacing on blogs.

Hardball can sure misconstrue a simple phrase. As a result of Chris Matthews not paying attention to his field journalist, he may have been the underlying force that turned this sentence “No one has confirmed the affair issue” into “There’s some personal questions about relationships that are surfacing.” Chris seemed to be back on track after Liz rephrased her sentence. Here, LIz is using the word “personal” in place of “affair issue”; so if we go back to her restructured approach of the same idea, there seems to be a flaw in sentence structure. Now she seems to be saying “There’s some (affair issue) about relationships that are surfacing on blogs” which IMO gives a totally different perspective on things, yet Matthews finds this approach much more comprehensible. If it were me in Liz’s shoes, but I wasn’t under pressure, I would’ve said “There’s some rumors of an affair surfacing…” I’m not a grammar wizard, but am I to understand that what Chris Matthews accepted as clarification to a scandalous affair was along the lines of possible rumor of an “affair concerning relationships”? Chris being known for his religious convictions affecting his journalistic viewpoint no doubt affected his decision to attack Liz Benjamin for not presenting herself professionally as a journalist.