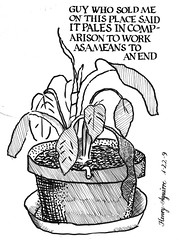 Since I was about 18, I gradually grew more and more distrustful of people. This has nothing to do with "hate" and people who throw that word around like a label to describe "haters" should be neutered/castrated. That's right up there with people saying "get a life". There's a plant at work that doesn't seem too happy. Seeing an opportunity to recycle my used coffee beens, I took it upon myself to mix a little used coffee grounds into the soil. Afterward, I tried to clean up the counter where some of the soil in the pot spilled. It was then that I saw it. A tiny little worm no bigger than a sprinkle. It could literally be inserted into the eye of a needle.

There's so much anger in the office, that before I had a chance to return the worm to the pot—worms are suppose to be good for the soil for plants—one of the other workers made an attempt to squish it with a file folder. I successfully saved the baby worm and hereby christen it a official mascot of the library. Book worm.

I drew this picture when I learned this weeks 'illustration Friday' word is PALE. I thought it was ironic that I had described the plant as looking a bit pale. It was this observation that motivated me to take it under my wing (so to say). It's a nice breed of plant. The others say it will never bloom a flower. I say it will with the help of the coffee grounds. The race is on. I drew this quick illustration to compare it with the progressive growth it will undergo when the caffeine kicks in.

It's Thursday today. It rained a bit. There's been a lot of melancholia coming and going. This weekend is the fight. That should put an end to any melancholia. I think I'll make a run to the supermarket soon for some pepperoni. There's nothing like a meaty pizza during a fight. Yum!
Tags: illustration
Subscribe to Telegram channel blanketsin.com
Subscribe