Revolutionary Road: a cool movie just a hop, skip and a jump away 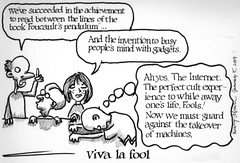 At 11:30AM im in the car and racing my way to the 134 FWY to make it to Pasadena's Laemmle Playhouse by noon. I ask at the box office "How long does Revolutionary Road last?" and the cashier says two hours and 15 minutes. My thoughts, after buying my ticket, is 'fucking trailers!' because now I have to go move my car which is parked in a max 2-hr parking zone.

The city parking system by the theater doesn't have a functional meter and everyone standing in line waiting to pay starts to bitch about their dollar being eaten. So, everyone is pulling out their cell and calling the number on the sign to complain. When I call, they assure that they won't be checking the particular lot where the meter is broken. :-)

Movie starts and I see that it's a dreamworks flick. I contemplate getting up and walking out, but weigh my options for wanting to see this flick against holding a grudge against anything remotely affiliated with Spielberg. Long story, don't ask (or you can always read previous posts). Talk about never judge a book by it's cover. I really enjoyed this movie.

For the dudes who don't like chick flicks, this flim contains a little nudity. In fact, the only nudity you'll see in this film is female nudity. I think this movie is ideal for the couple who don't intend to ever marry. So, if you have just about had it with you girlfriend nagging you for a matrimonial bond, this is the flick to go see with her. Because this is one of those dreamworks flicks, a production company that tends to maintain very thick anti-catholic view in their holocaust productions, i have to warn the metal heads out there about the anger management themes this movie seemingly attempts to discredit.

Dicaprio has issues in his character, but even though his rough manner with his wife is what causes the tragic ending in their relationship, his cheating and not being able to keep it secret from his wife is what makes all the screaming tantrums seem so spineless. Yes, I was upset I didn't know he and Winslet were accepting roles in dreamworks flims, and all I remember thinking was 'these two must be a couple hardcore anti-semite peeps who are making amends or covering their asses by way of being connected with such an opportunistic filmmaker.'

The scene I felt most touching was when this married couple goes out of their way to do outreach for a real looney bin, played by Michael Shannon. Keep in mind that it is neither implied nor suggested that the main characters in this story are/have any religious beliefs at all. What is obvious is that their marriage is on the rocks, AND it might seem that they jumped into their marriage too soon (a typical love at first site scenario).

CLERK
Is there anything I can help you find?

ME
Yes. I want to try out some of these inks. Do you have a dip pen?

CLERK
Well, is it all the same if you browse this sample catalog for the ink you are looking for?

ME
From this list I can say that I'm interested in this color, that color, and this color.

I POINT TO THE BLUES, LITE BLUES, TURQUOIS. SHE STARTS PULLING BOTTLES OFF THE SHELF FOR ME.

ME
Um, I can see you are pulling some J.Herbin inks, but I'm not interested in that. I want to get a feel for the flow of the ink.

CLERK
Okay. Pull the ink bottles you want to try and bring them to the counter where I'll meet you with a pen.

SHE GOES AWAY. I START EYEBALLING THE SHEAFFER INKS. SHE COMES BACK WITH A WARNING.

CLERK
We just ask that you not open the bottles right here because of the big ink stain we have on the carpet.

The audience kept laughing in parts of the movie that I didn't think funny at all. But when we all started laughing in unison, it was followed by the saddest part that I'm sure nobody else thought was depressing in the least. John Gibbons is an educated recluse who had been committed by his own mother to a psychiatric ward. His story is deep. When his entrance to the story occurs, I find myself guessing as to what possibilities his role in the marriage between Frank & April will have and I hypothesize a complete recovery for the loon when they all possibly take a long term vacation to France. I really like movies in which I'm put in a position to wonder and hope how and when characters, making an impression on me, will appear again. Then, the complete opposite of what I imagined takes place, and it makes for a better outcome too. That's cool. Go watch this flick but don't vote for it to win any awards. The best films are those that don't suck up to Oscar.