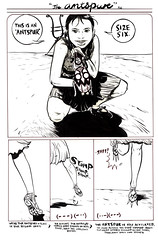 ust learned of the marriage between Gary Oldman and his number fourth wife. Apparently, there'd been rumors of the couple being together around the time The curious case of Benjamin Button had it's premier in L.A. December 25. The ceremony is believed to have occurred on New Year's Eve in Santa Barbara, California, according to sources. I got my info from

ohnotheydidnt, and they in turn learned of the ceremonial union from a London based magazine.

Most replies (300+) to this development on 1/4/09 | 20:39 @ http://community.livejournal.com/ohnotheydidnt/31106160.html seem to have been written by femme fans of the actor. His new wife has Angelina Jolie lips, and though I haven't watched many of Oldman's flicks, I did enjoy his role in Léon a.k.a. The professional (with Natalie Portman).