On the Lexus car explosion in Anaheim 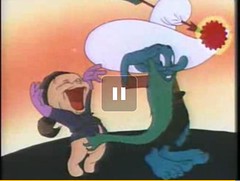 isguises are one thing that the Blue Man Group have perfected. Apart from their unfinished mannequin appearance, their glossy blue finish could only have originated from the Rider Slappy Joe character in the Loony Tunes cartoon called "Wagon Heels" Unfinished because mannequin dummies normally have a skin tone color. In the cartoon, however, I can't begin to fathom why a blue skinned patriot of American manifest destiny named Rider Slappy Joe would playfully tease his haunts with the ravings of a secret too hot to keep quiet, other than he is a ghost who died from asphyxiation.

I clipped a still from a cartoon that contains a red splatter. It reminds me of the film Passion of the Christ when it made it's debut in theaters across the U.S. I'd seen it several times, in different theaters, and recall red blemishes in certain key scenes. Eerily enough, this type of blemish was not passed onto the DVD version, nor the directors cut (of Passion). Clicking the image should take you to my flickr page where I have included url addresses to the cartoon streams for both the 1938 and the 1945 version of this Merrie Melodies cartoon episode. If you watch both versions, you'll be surpised by the changes that are made to the main storyline.

Recently, on the news, an incident where a car explosion resulted in a woman's death caught my eye. At first, the way the report was first cited, I got the visual that it was a result of foul play, like a scene from a mafia hit film (The Godfather, Casino). I never can help but be curious about whom the victims covered in the news might be and it's no surprise that these identities are usually withheld until forensics do their thing at the crime scene, or next of kin are notified.

This could be a suicide states an Anaheim police officer. … or, it could've been: she's been dead for some time, and the fire was an indication to start to dispose of evidence. She could've been… somebody could've been hurt or killed in the apartment. We just don't know until we gather/go thru the evidence and see what we have here. Until we first can identify who this female is.

They open the door and they have the oder of chlorine—what they describe as chlorine—a chemical base. Something that strong. And that's when they realize, hey we better back out.

I don't mean disrespect to the families of the victim by treating such a horrible incident as though it were an ongoing soap opera. As I research the subject on-line, I uncover more and more information as it gradually comes into light. For instance, that the fatality was described to be a woman at first made me question the act of organized crime, and I never really suspected it to have been a cover up for an accidental/deliberate death. That kind of thing is staged somewhere remote where the car can burn sufficiently before a firetruck can reach it.

In the days to come, the news networks will likely produce a name linking the victim to the explosion. I'll probably shrug it off as old news. I tend to lose interest on things like that if I'm not doing investigative research for creative writing exercises. You know, compiling adjacent events that may have a cause and effect on these things. For instance, Pellicano was finally sentenced for his part in corrupt business activities. He gets 15 years. A good researcher would pin point the approximate time the judge handed down his sentence with the exact hour the explosion occurred, then find possible links between them.

It's a sad way of disregarding the seriousness of the crime, but when I decided to write the great American screenplay, I knew what I would have to do to maintain my audience's interest. As far as relevancy goes concerning blue skin tone, all I can think of is the change that takes place with time between one thing and the next such as the correction that somebody will one day make in an attempt to clarify the real name of a cartoon character on wikipedia/jrj-socrates dot com, and the clarification in follow-up reports that may describe more clearly whether the explosion was a bomb or a cover up.