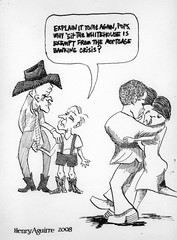 brilliant_bubbles-76534329@N00
THUMBNAIL
God told me, since I'm his number one fan, that I should be his replacement.

What a romance Misery is, and that it doesn't come across as a chick flick, considering that the novelist is a harloquin story teller, gives this movie that psychological torment theme film noir flirts with so well. Somebody needs to add "full moon" to the keywords describing this movie on imdb; or, is it already there, but not visible to those without a Pro membership?

The moon is a giant speech bubble with the image of JFK's profile facing east. I have a thing about full moons in movies, and what I would really like to see is the first occurance in which a film captured the image of the moon by a high resolution camera.

Another good film I saw (for my Thanksgiving holiday) was Casino. At the very end of this movie, there's a scene where a room inside a casino is used for counting currency. It's shown earlier in the film too, but close to the end of the film, I thought Steve Carell might've held a short role as a money counter. However, I checked imdb and Steve Carell's name doesn't show up, however, I guess that might be because I don't hold a Pro membership.

Scrolling thru my TiVo recordings, I thought I would watch an episode of the Office called Weight loss. I didn't realize it was episode 1 from season 5, and I became confused trying to understand why Pam was going to school again in New York. I just can't get enough Office and I tried to watch the episode in which one of the workers, my guess is either Pam or Holly, get upset because she's the only one who dressed up for Halloween. However, that episode was interrupted by the breaking news of the forest fires. I don't think it was an episode from season 2 Halloween, but I can't find it on imdb. Oh yeah, I'm not a Pro member. I guess it was Employee transfer, so I'm going to turn my TV off and stream the vid on imdb, although the narrative doesn't say anything about only one employee dressing up in a halloween costume.