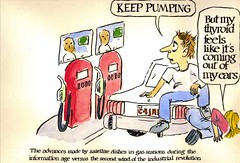 hen I was a toddler, I use to borrow my daddy's camera and take a picture or two. I loved it and it was quite easy as the cameras in those days were automatic. Of course, Dad would supervise whenever I'd take a picture and it was mostly an event or a trip that I was given the honor to do so. Then, when I started high school, I had taken over my sister's 35mm camera without the faintest idea of what it was I was doing. I never did get the gist of picture taking. I bring this up because, around that time, one of the last remaining old time gas stations was only two blocks from my house. It wasn't a gas station where people could still drive their father's sedan and fill up with gasoline, it was almost as if it was an historic site. When I think of what a wonderful picture that would've made, I kick myself for not learning how to focus and adjust aperture and f stop on the thing. It never dawned on me that that would be a picture to remember. My sister had brought it up after the double gas pumps had already been removed for a car wash.

All these years and I still can't get that out of my mind. I remember when gas stations had air pumps. I always use to fill the tires from my bicycle at the station instead of using the air pump in the garage. I suppose if anybody would notice the shortage of air progressively getting worse and worse as time rolled by it would've been me as I would sometimes ride my bike up to school. First, I began to notice that the air pumps were reduced to only one island where the gasoline could be pumped. Then, this air pump was removed and placed somewhere on the side of the gas stations, most likely for convenience purposes as people who needed to fill their tires would find themselves having to wait their turn while other's were using the island to fill up with gas. Smart move.

I would say it was a management decision in an effort to expedite the amount of time people would spend at the gas pumps. The more time a pump is available for filling up with gas, the more money coming in, right? The flat screens that some gas stations have installed on their gas pumps seem really interesting, and I had to find a way to record this moment in time.

I never did wear my shirts with one longer sleeve than the other. I don't know how I may have overlooked that, yes I do. I've been visualizing myself as the chauffeur from Driving Miss Daisy, or some other b&w movie containing chauffeurs, in which I sport a single sleeve on my arm closest to the windshield to block on the sun (I seem to think one arm is darker than the other). Anyway, the hypnotized lad sitting on the trunk of his car mesmerized by the TV is pumping air into his tire by leaning his weight on his left foot poised on the girl's waist as she blows air out of her mouth—if you've ever tried to siphon gas, or blow a spit was stuck in a straw, you might know the feeling one gets in his glands just below the jaw—an impossible task, but hopefully impressionable. There are hundreds of people out there that don't realize that despite the air pumps at gasoline stations being hooked up to a pay–as–you–use coin slot device, by law gasoline stations must activate their air pumps for free when asked by a customer.