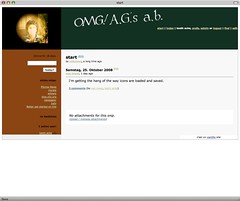 ince about a week ago, I've been slowlyg building my Vanilla wiki on a local server. This picture is about the only chance I'll probably ever get to having it appear on a network. Rumor has it that the difficulty of installation for a local server is nowhere near comparable to the headache it might be installing the thing on a network server. It was three years ago when I first gave a real stab at downloading Vanilla and making it work. Now that it's up, I feel like getting myself a domain name, slavezombie.com, and trying to get it installed.

As you can see, this is as plain as you can get for a blog, but it's also within my grasp of understanding the way things work. I still don't get what Rebol is, nor Core24 for that matter, and as far a bsh, ksh, tcsh, I'm still very naive. It was fun making the changes to the css file using vi in Terminal.

I having dizzy spells. ***OK, they're gone. I made an appointment with a therapist, or a social worker, whatever they call themselves. I think I really need somebody to talk to and the bartender last night kept haggling me to show her my I.D. That's one of the set backs of going to a bar that's lowly lit.

I joined a community about Rebol. I thought it might be useful to write soemthing along the lines of technical support for this wild wild wki "Vanilla" that I'm spending hours on… Zzzzzzz