Blog: To show sympathy for journalists and their right to freedom of the press 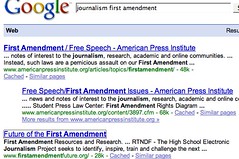 f it wasn't for my zombie f-list here on lj, (see

laist) I would'nt've known about the auto accident Morgan Freeman was involved in until tomorrow. Apparently his condition is serious as his car is described as having flipped over several times and the jaws of life being applied to his extraction. Just last night I saw Amores Perros and, damn that's a long movie, I'm just hopeful that nothing drastic happens to my favorite actor. Although Amores Perros has nothing to do with Morgan Freeman, there is a traffic accident that leaves a character with one of her legs shattered to the point of needing amputation. That's a good movie, but it's hell on my back sitting for 2 hours 40 minutes straight.

My entries are just as described feeble minded journalist wannabe blogs. I point to newly discovered sites† with little objective criticism. It's almost like having a del.icio.us account. 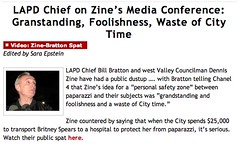 I know this happened a few days (if not weeks) ago, but I'm just now reading it from citiwatchla. I stumbled onto this by trying to figure out how to remove the office e-mail account from an annoying weekly spammer. Nothing in the instructions for going about the removal process seems to make any sense as I go thru the steps carefully to realize that I'll never successfully achieve this task at hand. I think I know my way, by now, around their feeble community project like the back of my hand. Frustration sets in and I begin clicking meaningless links.

I worry about how the e-mail I sent to the website administrator of historichighlandpark.og might be taken as I honestly don't know if "historicalhighlandpark.org" is being subscribed to us, a local library, by another office higher up. I worry about some councilman or equivalent stopping by and inquiring as to who is sending messages to be removed form this information service. I've been seeing so many cutbacks effecting some of the flyers and hand-out materials like the bi-monthly calendars and hearing that these items are now only available on-line (in digital format).

That's my frame of mind (digital is cheaper) when I see Bratton's comment on gays. He later justifies his comment by adding that he has a sister who is gay. I found the article interesting, but I'll admit I thought it was about e-zines. I guess it's only a matter of time before we begin seeing people with surnames like Blog holding semi—high offices somewhere, but I don't know if I believe that Bratton wasn't being malicious at heart regardless that homosexuality runs in his blood. Is he saying that he is a closet homosexual? because unless the answer is YES, I fail to see the relevancy of calling Lindsey Lohan gay in a press conference.