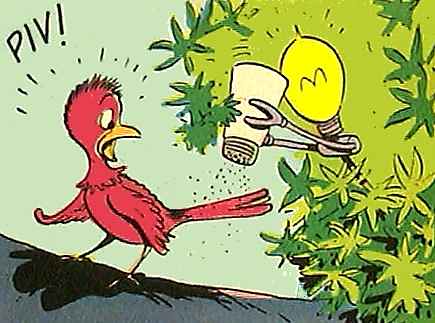 When I first learned, in a cartoon, that the oldest trick in the book to catching a bird was to sprinkle salt onto its tail, I've always wanted to test that theory. Of course, when my folks one day brought parakeets home, the urge to test this theory would require that I place the bird outside of it's cage, hence risking that the bird would fly away. So, I erased this quandary from my mind. Thinking about it now, I ask myself what must've been on Carl Bark's mind to provoke such an idea in a child's mind? I mean, is it really something people use to do in medieval times, sprinkle salt onto a bird's tail, to catch an otherwise unobtainable bird? I doubt I'll ever find anything suggesting such a thing.

The only other solution is that Bark's intention was to prepare people for the information age. Don't believe everything you read (hear) especially if you saw it on the Internet.

Watching the Baseball game the other day, the last time the Dodgers were playing somebody at home, possibly the Halos, or the Brave (I dunno becuz I don't keep up with baseball), I thought I saw a Catherine Keener doppelgänger sitting right behind home plate. My friend gets tickets to the games every once in a while and invited me whenever they become available. I said yes. I dread baseball hats and because I'm not the most enthusiastic person at a sporting event, a baseball cap might liven my appearance a bit.

I can't express how much I feel that freedom of expression has slowly been getting stripped away. I guess I first started to feel this way when I had difficulty grooving to the tunes performed by heavy metal bands. Back in the 80's, it was all noise to me. I couldn't distinguish any pattern in melody or harmony. And the lyrics... I found it doubly hard to make sense of the words in the songs, let alone trying to decipher them without a printed lyrics sheet. But my theory is this, because who wouldn't want to be in a hard rock band after all, getting up on stage is embarrassing enough. Nobody needs critics to poke fun at a ballad that a musician painstakingly writes at gun point. Gun point by his own hand, or a bottle of sleeping pills, a wrist slicer, etc.

Because nobody needs that, I feel that thrash metal singers are successful because of their disregard of what people think. What better way to do that than to yell out their lyrics in a hoarse voice. The point is this, gosh darn it, only in a capitalistic world will such music be stricken from the public airwaves and offered thru satellite connection for money.