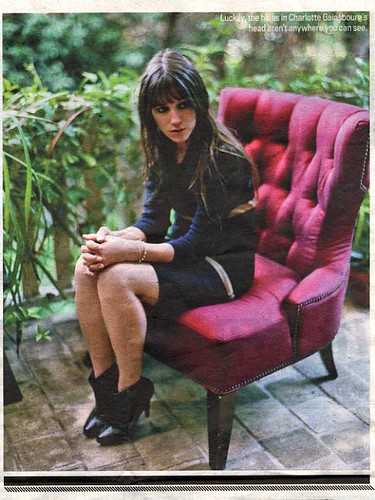 Who knew that the leading female role in the film Antichrist was played by a woman who's greatest topic of interest might possibly be the hole in her head. I didn't know anything about Charlotte Gainsbourg when I went to see the film last year during the short, limited release it played in L.A. I still don't know who Charlotte Gainsbourg is, but L.A. Weekly came out with an article on her in which it describes her as a musician.

As a matter of fact, Charlotte may not be such a stranger after all. In the article by Drew Tewksbury, Charlotte is said to have worked with performer Beck Hansen (who ever that is). Could it be 'the Beck' of the LOSER fame? I like that song. Soy un perdedor. I'm a loser, baby. So why don't you kill me?

There's talk of a Beck/Gainsbourg music album—IRM. Wouldn't you know it, I missed her promo gig on the Letterman show in January—in the L.A. Weekly article Charlotte Gainsbourg's skull sessions, Jan 29–Feb 4, 2010. A bit late considering the Late Show performance was recorded on Jan. 22, but hey, this is what it is to be a head banger chick. Don't mess, right?

I really loved watching Charlotte act in Antichrist and I'm hoping to see her in a rerun of the Late Show. At the very least, I shall be committing her name to memory for when I browse the live music clubs around town and channel surf those late late shows for something to Tivo. What is it that intrigues me about Charlotte? I mean, her music doesn't seem remotely close to being heavy and dark like black metal. Well, I'm sure you may have heard at one time or another that machismo bit about skull fucking and/or penetrating every crevice on a woman's body. Welp… need I say more?

These are the Basic Types of Conflict in a Story:

It seems what I'm battling is an inner conflict. I have no discipline in sitting myself down and hashing out some hard copy pages. The screenplay I'm working on is simple. I started at the end and the main character dies. My own personal inner conflict is in coming up with a way that leads to his demise. I found this web site by googling "How to write conflict"

How to Write Conflict: Understanding the Most Important Part of Writing Fiction

The ending is bittersweet in that, while some of the characters disliked the main character, one antagonist hears about the death and mourns. But when said antagonist learns more about the main character's life, it becomes obvious that while this tragedy may have arrived too soon in life, it was truly the best thing that may have befallen our protagonist, as living would have been too sufferable for him.

What the "F" am I talking about? What could possibly be so bad to welcome death? Pancreatic cancer, AIDS, progeria, downs syndrome, brain cancer? Even if I wanted to, I don't think I could write about these conditions. The bloke is suicidal as in Crocodile Dundee, or Leland Van Lew. The only difference is, he is disliked by most everybody in the story because he's a bully, an evil monster, a hater, a pessimist, and all that other good stuff I have yet been able to conjure up. He steals mementos from people's desks just to watch them scurry about. He discreetly farts in strategic locations to see his most loathsome co-workers suffer. He back stabs, he lies, he's most definitly a man who would hurt a fly. My biggest problem is how to approach one antagonist into believing he was a righteous, misunderstood gentleman.

Well, I've been tossing the idea of sexuality. We all know that a movie must contain a sex object as a leading character in order to maintain the audience's attention. So, considering the male hormone being what it is, when a nice girl, who's been around the block, tries to get close to him, this sorry excuse for a man, who isn't very good looking at all, reacts inconsiderately with intent to harm whatever feelings in her he can manage. Somehow, someway, the antagonist catches wind of this and sees clearly what we all seemed to miss the first time around, that he was only trying to save this woman whom he recognized as having a crush on him from the only thing that could result from a relationship with him. The pain and the suffering.