I think I actually sat thru the whole Late Show in anticipation of their performance a few weeks ago, but they must've cancelled (or the networks got their bookings crossed).

But this picture is probably not ( Collapse ) Ganked from

NBC4 nightly news yesterday described LAX as sticklers for real (legal) names when trying to board an airplane. According to the report, people who use their shortened nick–name, the most likely occurance, or a middle name, may be left behind. That got me thinking of how awful that must feel to a person who paid to fly from point A to point B. Being overlooked at a bus stop is one thing but… I guess flying is so common now that the airline industry is trying to reap the benefits that public transit enjoys.

I think this BS is wrong because people like using the shortened equivalent to their names. I've always felt robbed after high school when I lost touch with all of my friends. I felt like I didn't deserve my shortened version of [slavezombie] as my name anymore. I gradually felt a need to place blame at my non-existent employers (at that time.) While my co-workers would only need to be reminded once or twice to use my preferred name, the boss and whomever signed my checks would rarely if ever comply. At the time, I contemplated officially changing my name and stumbled onto information that describe some stupid law that indicates people don't have to pay a single cent to change their name. It's called a usage law, or something like that. I don't know the penal code for it, but what it states is that as long as people constantly use their preferred name ALL of the time for everything they do, then it is legally binding that everyone must abide by it.

I don't know about you, but to me that sounds like my paychecks therefore would have to read the way I want them to read. I wonder whether I should write my congressman, now that there is a crackdown on government, why such a ludicrous description of name changing procedures would continue to be employed if it is obviously false. There is no way in hell I could ever get an employer of mine to print my paycheck the way I want it to read, much less to convince the registrar recorder department to adjust my social security number. So, wtf?

To top it all off, another article in the Times directed my attention to privacy infringements conducted by market analysts in corroboration with nerds who enjoy building search engines for every little lost thing America is brainwashed to believe is recoverable. Read the entire article here.

Let's patiently wait to see how many smoking scenes make it into the English version of the movie The girl with the dragon tattoo. Does the MPAA rating system take off points by some unwritten guideline of one smoking scene for two nude scenes? I can't wait to see history get rewritten when Shutter premiers and the N-word removed. Hm? if people start saying the book was better than the movie, will American's get the wrong idea after realizing how much harsh language had been edited out of the film? It might suggest the idea that subliminal messages have taken on a more effective mobility?—it just a timed release film dawning the new millennium—even the simplest minds would be prone to questionable hidden suggestion.

( Collapse )Several rumors have been speculating on a Hollywood version of the book.[7][8] Yellow Bird, executive producer Søren Stærmose confirmed in an interview with Swedish newspaper Expressen that negotiations are taking place. This would not be a US remake of the Swedish films but rather new Hollywood films based on the books. In the interview he states that the possible US films might be produced in a similar way as the Yellow Bird co-produced Wallander tv show starring Kenneth Branagh, shooting in Sweden using English-speaking actors. He also states that it is up to the director and says that the story could just as well take place in another country, like Canada.[9] According to the The Guardian newspaper, word is that George Clooney, Johnny Depp and Brad Pitt are all interested in playing the central role of Mikael Blomkvist, has been followed by suggestions that producer Søren Stærmose, of Yellow Bird, who holds screen rights to the books, has been approached by directors including Quentin Tarantino, Ridley Scott and Martin Scorsese. [10] [11] 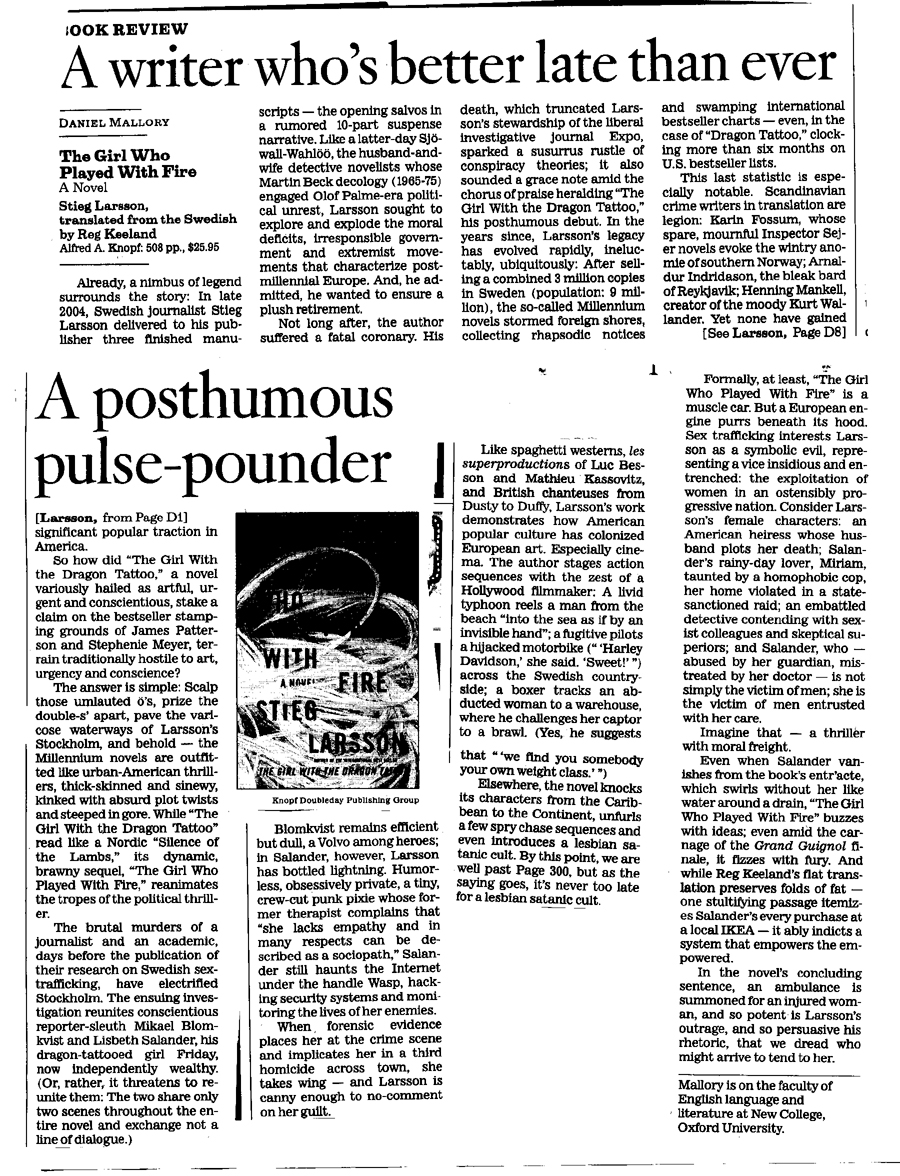