Of all the roman numerals converter engines out there, I think I like this one the best. http://www.guernsey.net/~sgibbs/roman.html?#

Here's why I fear actors so much. http://www.youtube.com/watch?v=npP73QIApFE I don't think I could ever bring myself to marry an actress. I don't care how beautiful she is, it would never last more than a year. And, before I forget, I found this video on 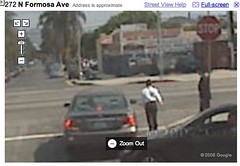 This morning's commute to work was unusually odd. There is always a sign for days like these. Days you know will be oddly peculiar. The orthodox jews I see dressed in clad black with strange black hats and long curls as sideburns along specific parts of town (Beverly Blvd on weekends) aren't so out-of-place on weekends near synagogs. These pix to the left are google images. 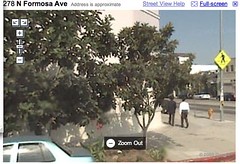 It wouldn't be so odd if I didn't know that the neighborhood where I work is dominated by middle class catholic families. These pictures are brought to you from google maps' street view. I thought finding these religiously dressed individuals would be easier as they're quite a sight to see when driving down the boulevard I like to call jew town on weekends. This picture doesn't show the details that mark the dress code and the people inside them as things to gawk at. It's hard not to gawk, but I'm getting better at it. So when I saw a typical religious man where I work, the first thing that goes thru my mind is WTF. Second, what did I do that I'm seeing men in black in the places I go to now? 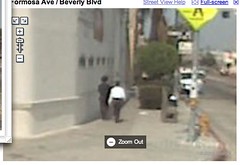 Obviously the automobile that drives down the streets with all the funny looking cameras that give it a war machine characteristic wasn't driving down jewish town on a weekend. Maybe tomorrow I'll make an effort to take a picture of exactly where I saw the stranger walking (near Fresno bakery HQ, near the metro rails, and down the block from a trailer park.) "??"

I'm still a bit steamed about it. The regional manager replied to my inquiry and flat out said, "Yup. Sometimes you just gotta bite the weenie and either take your lunch break when you are told to take it or lose it all together". Doesn't matter that I usually take it after 1PM. So, at 2:15PM I drive home for a pizza lunch. On my way back, I take the scenic route. Upon reaching the point where blackie was ably walking, I can see in a distance a helicopter hovering unusually low right smack where I work. God forbid something would've happened! The moment I pull into the parking lot, the whirly bird disappears. Then I learn of a rumor about a shooting nearby, but even before leaving for lunch today (or maybe it was yesterday), another rumor that a fire had started up in those Mount Washington hills was the buzz.

Oh yeh. I took a picture with my fingers crossed trying to get the lighting right to show off what I think are my hazel colored eyes. NOT. I've been looking at Kate Bosworth's eyes all day today with an appetite to know what they taste like.