Warning: If you can see this, then either your browser does not support stylesheets (CSS), or else you have turned stylesheets off.

Scene One
INT. APARTMENT - NIGHT
Donna sees his unusual behavior of going in and out of the house for idle little things like throwing out a bag of trash, looking for the cat, and checking to make sure the windows in the car are rolled up. As each of the preliminary expedition outdoors take place, he consolidates his calculations of the ether first by puting on a jacket, second by putting on shoes (instead of slippers) and third, grabbing his keys.
Donna
Where you going?
Bier
It might rain. I'm checking the windows in the car.
DONNA
Please. It was 75 degrees today.
Bier
I thought I heard a forecast earlier this week for drizzles.
Donna
(UNDER BREATH)
Drizzles, yeah right.
Bier exits. The engine revs up and pulls away.
Donna (CONT'D)
It's not a matter of satanism… we just don't have freedom in the city to be wandering the streets at night. It's different, I guess, for junkies. Homeless. I just don't think a person should need street smarts to have to enjoy a walk of peaceful of night air.
This Plot Point reflects the following Story Stage: lifestyle
This Plot Point affects Bier in the following manner: Bier can't understand the impending friendship Donna showers him in because he never instigated any behavior to encourage it. He believes they're two totally different personalities. One loves solitude, the other loves company; yet Donna's odd way of dressing might suggests a dark, outcast personality.
Bier seems okay around friends socially. This includes Donna, but he has difficulty letting loose with strangers. Perhaps it`s all a charade, and it's Bier who truly has a natural way with people when it comes to being friendly.
Unaware of the poison in the spring air this time of year, Bier suffers a sneeze attack as a result of his plans to shop for some essential home items. The moment he steps out the door, he begins to sneeze like a rocker, clearing out his lungs out by vocalizing a grunge-like voice at the same time. It turns heads, especially in his job.
It is this very signature sneeze that provokes him to carry a handkerchief wherever he goes. At least when he's at work, he can muffle the sound others might take for some heavy metal lyrics being sung by a nut case. No other alternative but to cut his shopping spree short that day, he becomes restless for some night air. The dark, musk of night makes him want to run a few laps at the park. 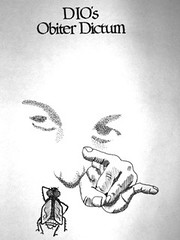 Sadly enough, it seems that The minor accomplishments of Jackie Woodman may be on hiatus or something. I don't recall removing the season ticket from my TiVo (as a result of disciplinary actions I put myself thru as a result of cheating during the WGA strike). This is the very reason why I try not to watch new shows no matter how positive the reviews they get. I never knew that The Garry Shandling Show was doing so well when I had decided to get HBO, or whatever channel it was on, but by then the series got itself canceled.

LA Weekly had a report on the Pellicano Briefs section called:

by Steven Mikulan
It turns out that the Pellicano trial is becoming a regular soap opera for me, although I wish I was a speed reader to have enough time read up on it all. It seems like there's more news to listen to/read up on on-line than there is on network media. It's like a blogosphere war against corporate media. After I learned that the trial was being held here in Los Angeles, I thought it would be a wonderful idea to spend the day at the federal building where the trial is taking place just to listen to the proceedings (as if they`d let me in) One of the things I regret not doing earlier in life is having lied in my resumé about my experience in graphic design. I probably wouldn't be in the dead end job I'm in now if I had maneuvered more strategically my job applications. I mean, everybody lies in their job application, right? So I guess I gotta start forging myself some press passes to get in on all the choosma.

I was brainstorming the picture above earlier in the week. It started off as a pelican speaking behind a podium in which various personalities and stereotypes like fishermen, grizzlies, a madame with fishnet stockings, Jesus Christ, and even a mafioso bearing the weight of an anchor would appear in the background as part of the spectators in the courtroom. Then I visited IF and started thinking of what a pet peeve was, as I never used the phrase myself. This got me thinking of why I'm not illustrating storyboard panels for the screenplay I keep insisting that I'm working on, and that was the seed for this scene. I realized on day that I was making the sign of the horns with my fingers (like at heavy metal concerts) whenever I would take aim at a fly to try to flick it dead.

After getting good at flicking flies dead, I began to feel as though I was saluting a fly, or beelzebub, with the sign of the horns (whenever I took aim at the peskey invader, mosca domestica. (I rarely to this kind of thing outdoors) So, if my movie ever gets made, it will contain a slow-mo of an actual fly being killed. Nobody cares about flies right? It's not like harming animals for the production of perfumes or anything.

I just picked up a book Dynamic HTML because the research I've been doing on how to learn XML has divulged to me that one must understand stuff like DOM and API and JavaScript. This book is really thick and I'm like all over it, but with a slight ADD problem. The moment I read something that I hadn't understood before, I go right to my lj and fix it. Some of you might be seeing the locomap that I have in my profile summary here on the QHB page. Well, I apologize for that and the fact that I've spent zero time positioning it aesthetically. I just want to hide it because as long as it's loading (somewhere in the background) my locomap is earning visitation stars. They're really cute blue stars against a read and black map.

Earlier today, I thought i had successfully hid it, but then I opened Safari and saw that it was still there. I've hidden it again, I'm sure only to stumble onto it when I open my blog with a PC version of IE. I don't even want to think about Navigator, but I'm serious about thie O`Reilly book, the one with the flamingo illustration on it. It would be ironic that the book with the animal I have an interest on would be the book with all the answers. Hippos are my next fav animal. I wonder what O`Reilly book that one is.

You might be seeing more funky changes, but I won't be completely retrofitting my stylesheet for some time. This book has some 1073 pages, and I'm barely on 26. I feel like a student again. Zzzz