I'm going to do something out of the ordinary, I'm going to make this entry sound like it's all about me and not just a SECOND review of the last episode I saw of Minor accomplishments. It occurs to me that there is a moral somewhere in the back of my mind. When I practically described a play-by-play action report of Jackie finds her match to Jude at work, I compare When Harry met Sally because the orgasm scene is so popular and well known. Jude exclaims, though she never saw the film, that Sally was faking the orgasm. I responded that nobody knew for sure if it was real or not.

An article I read, thinking that soon there might be a breakthru in bringing back the Dodo bird (Do-de-do do do) so I could adopt one and make it talk and see if Merry Melodies cartoons, from the 70's, really does depict the sound a Dodo makes accurately, got me thinking. The article was called

… There's a sentence in this article that reads

Researchers in the nascent field of synthetic biology hope to use the method as a blueprint for designing microscopic creatures that can produce renewable fuels, medicines and industrial products.

which I took to mean, scientists can now clone an extinct bird to prove that the scientific renderings of illustrated images really reflect its likeness. WTF does needles have to do with this? Isn't it obvious that just as acupuncture rarely hurts, and televised programs demonstrating the ability of biologists to inject a tiny cell with DNA (using needles) would be undetectable if same needle was used to inject a person? So why do doctors feel the need to intimidate their patients with humongous needles (and fingers)? Not only that, but it scares me that, if a bio-hazardous virus got into the wrong hands, needles that small would never be detected during an autopsy.

So back to Minor accomplishments and the Jackie finds episode. If I worked in an environment where super models were easily accessible and frequently seen as casually as sun bathers in Rio de Janeiro, would I fuck the supermodel, or would I seek a relationship with somebody closer to my age like Tara? Another question is, if a person like Tara were to receive signals that I was interested in her, would I fake orgasms to discourage further intimacy with her? That, in a nutshell, is what Jackie finds her match was about. Sorry if I spoiled it for you, but you'll get over it. It's only a thirty minute sitcom.

What's funnier, I think, is somebody doing the fake orgasm thing with a supermodel so that further intimacy with her is not escalated. I mean, supermodels must be fun to be with platonically too. They meet all the horny dog actors who are celebrities that everyone wants to know. They get calls from the rich, old farts who dedicate most of their time & energy to earning an extortioned dollar, they know all the cool designers of major clothing lines; and besides, who wants to risk learning about STDs by example when you can spend innocent time chatting on the phone (appearing popular), having picnics (appearing popular), sending e-mail (appearing popular)? Besides experiencing an aneurysm from neglecting one's natural urge to hump an attractive woman coming on to you because, well, she's in heat, builds character. We all die one way or another, right? What better way to go than in the presense of a beautiful woman? It's a loveless world anyway. 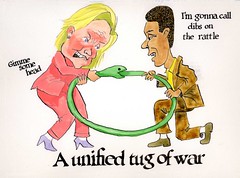 27th January, 2008 ©
Today's blanket sin
There's something about the CIA that impels me to read a news article. Like reading the business section and stumbling on all sorts of tidbits, predictability that results in liquidation sales at Tower Records going bankrupt, and Virgin Records close behind, it seems that top secret information in an information age is the smart news to peruse these days. Remember, when the CIA claimed they'd been warning us about the possibility of a terrorist attack by air, they simply couldn't put their finger on how, when, who and where. Well, as a result of the torture methods used by the CIA for extracting information (and confessions) from POWs in Guantanamo Bay, the Honorable Richard W Roberts is declaring an ultimatum for the Bush administration to cough up a written explanation, inside of 3 weeks, that seemingly disputes any court order attempts to retain the evident videotapes that were erased.

Are you hearing impeachment? That's what I'm talking about. Don't you even believe for a minute that I carry my digital camera around everywhere I go because I like to take digital photos of top secret information, or take snapshots of people I deem under surveillance. I think spy work is the worst kind of job, unless I'm digging up information about my ex, because there's never any peace in a job like that. I'm paranoid enough just being a library clerk, I don't need to be somebody who is constantly looking over his shoulder for peeps least likely to be the cause of my doom. Although I am getting better, if I do say so myself, in this cartooning bizness.