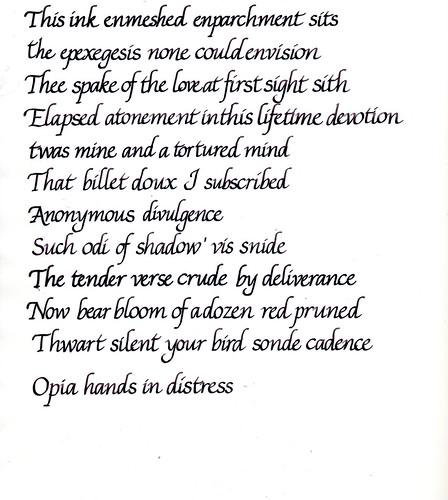 I found someone from my past, but I couldn't even have a face to face. So, what that means is, if I ever bump into her on the street, I wouldn't recognize her. And although it's true that I'm constantly imagining her, I'm not about to ask every person I bump into, "Do I know you?" She's been married fourteen years.

So, why does life suck for me? Because I still feel guilt ridden for two timing her. Inquiring to her health, she told me that she takes some meds for an overly active heart (something like a bleeding heart), and some other minor ailment to do with thyroids. But there was some good news and that is she is raising two healthy children, one boy and one girl. She loves baseball and enrolled her son into a baseball team which happened to win a championship playoff competition and will travel to Florida next. Wow! That's really something.

It's strange that the two of us should have been going to college at the same time. I expressed how rotten my luck was that I didn't ask her to marry me then. I was so dumb. Now I'm kicking myself about it. Life goes on, doesn't it. FFFFFFFFF.

I thought that AG might be her, but according to my friend from bygone days, her job involves fashion, not research journalism. While it is irony that the network news in L.A. should employ somebody all the way from Queens, N.Y. who is my ideal woman, my life sucks that I'm a nothing to her. I've heard it before, supportive encouragement from friends, that I'm not a nothing and that there's plenty of fish in the sea; and I agree. There's Ethel Carter from the movie The hills have eyes and there's Giannina Facio from the film Kingdom of heaven to whom I'm nothing and eight and nine years younger. So, I just want everyone to know that my life sucks because it seems that I can't bring myself to stop finding people to love from afar through my TV set. Hence, I seem to be having crushes on the creations of hairy, wrinkled, reclusive movie directors. This can't be healthy.

I've got to stop relying on the Internet for accessing bio info on peeps. That's where I'm developing this obsessiveness. Meeting a girl at a bar (or the market, laundry, bus stop, stop light) the only way to find out more about her, is through idle chat. And you know what's tragic about that? For instance, you find yourself at the mall waiting in line to pay for your stuff. You see a woman who looks like Ana Garcia, or her clone, and begin to yabber. Before the conversation begins to get serious enough to ask for her telephone number, she's already paid and out the door. A person you'll probably never see again. Imagine seeing your soul mate in line at the gap, and saying something like: "Hello. Are you single? Can I have your telephone number?" It doesn't happen. Yet, with me, if I'm not reminded or poked, I'll totally forget the reason I sparked up a conversation with somebody, and I probably didn't have a pencil on hand anyway.

What are you afraid of?

There's nothing more fearful than being alone in the world and falling in love. My friends tell me that it's quite surprising what a person is capable of when everything is said and done. I mean, at this point in life, I'm so comfortable with my lifestyle, I can't imagine what living with another person, in a strange part of town, would be like. But even that is not as scary as being evicted for one reason or another, and having to fend for myself without the helpful support of neighbors and friends I've come to love and respect. Falling in love would cause me to be dependent on another person. I'm scared of losing the person I decide to fall in love with because of some dump, immature tantrum I might feel obligated to express.

My life seems to be getting more interesting, but a hell of a lot more complicated. It's like, it doesn't begin to seem worth living until I put some thought into it. And you know, I pretty much just exist for roaming with my arms extended in from of me (because I seek hugs, and all the beautiful ladies just shrug and run away).

So what is this new fascination for living life that I have? It sure as hell isn't some funny little cartoon that makes me laugh silently in my head while I toil with pen and paper doodling my crazy lines. I wish I could say. However, unless you're willing to share the ups as well as the downs, I don't think it's any of your business considering this blog is still public. Don't be offended avid readers. I don't mean you, especially if you reply to my nonsensical entries. Believe it or not, I stress when I reply to your input, because I really don't want to offend—I love you so much.

So, if you keep up to date, you may get the impression that I might have a touch of bipolar. Why else would I be happy as a clam one moment, and depressed while writing poetry the next? Well, the answer is IN YOUR FULL VIEW. When I clam up, I'm happy. When I compose iambic script, my head hurts, my wrist hurts, my fingers hurt; hence, I'm unhappy. I want apologize for writing in the last couple of entries this: FFFFFFFFF

I saw a great film with two wonderful actors (Jennifer Aniston and Clive Owen). In one sexually intensive scene, Lucinda Harris has this line followed by heavy kissing: "I think I want to fuck you." I would just like to point out that the day the heavy kissing is preceded by the line "I think I want to forget you." which may be predictable whenever the network broadcasting companies decide to seek FCC approval for air time, then you will understand how film makers are using their limitations to make statements. It's the way I look at the cigaret issue. If a movie is labeled R for glamorizing smoking, but OK'd for PG13 if the smoke is portrayed as a health hazard, then the writer is going to ask why the FCC doesn't use CGI to transform the fag (as the English would say) into a straw, or a pencil, or a lollipop. And the smoke? Off the top of my head, the smoke can be overlooked just like the questionable dialog between two people who might proceed to get it on after a line like "Lets forget".

Another scene I liked was in the special features of the DVD. It got cut. You'll see Charles Schine (Shein was the name of my old Perform 450 computer BTW) climb some steps of a court house while speaking into his cell. Right behind him, unknowingly, is Lucinda. As he reaches the top of the steps, Charles stands back to focus on his call when he sees Lucinda, dressed in a trench coat, emerge from the steps. She pauses in a deep stare at him and he at her. Speechless. Lucinda then proceeds forward without a word and Charles' gaze follows her stunned. That's what I call romance, folks. That's what I call love.

I've never met Jennifer Aniston, so I don't know if she exists. Did I tell you? one day, I overheard my older sister comment about something to this effect. "Since I've never been to New York, how do I know if it exists?" And everybody thinks I smoked too much of the ganja. Well, maybe I did pop one too many LSD tabs because Jennifer Aniston may well be a simulation like Simone was in the Andrew Niccol film S1mone (by the way, my home phone is h1de-ids). I would truly love to be given a writing assignment to interview Jennifer Aniston. Does anybody know where I can find a job like that?