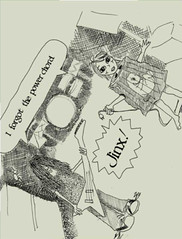 This is getting more burdensome than fun. Yesterday somebody threw my car a morsel of food. I expect the education level around here where I work wouldn't know the difference between feeding a lama at the zoo from an inanimate object. That's probably why I see so many tutors.

Having reached my level of tolerance in listening to Morrissey, I tried to switch over to a book on CD, The girl next door, but the person who was reading the novel had an awkward way ot voicing the lines of one of the male characters. The reader was female, so it's understandable that her voice would be limited in reaching a tenor level.

The moment I saw Morrissey's You are the quarry on the shelf, I immediate had to have it. It almost got stuck in my disc drive too. It was then that I began to wonder to myself whether it was really worth it, downloading the MP3 version when none of the titles of the songs seemed to be interesting.

Thank goodness there's only four more songs to the CD to review. I brought up an unusual incident that happened to me in 2005 last year. I had thought I had seen my xgf. Normally, when lovers see each other after a length of departure, they acknowledge themselves and catch up on things, however momentous the moment. To this day, there's a question mark over my head about whether it was her or not, but I've been like that most of my life since I met her. I think that's how LET ME KISS YOU makes me feel.

What Love Song Are You? 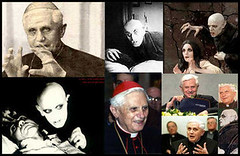 vampire_pope
Originally uploaded by The defeatists.

I've been in a stooper all day today, to the point of dozing at my desk. I don't even have ambition to grab myself a latté. The trooper that I am, I search high and low for something, anything, on the web to raise my spirits. Here it is. Something to remind me when I get home to adjust my TiVo to remove the NK wish list and change it to Kinski (only). The other day I caught the HD premier of Fay Grim. I enjoyed it! as much as I read the bad reviews on IMDB. I can't wait until the opportuntiy arises to see the first film that sparked the sequel, Henry Fool

Hmm, who do I have to thank for remembering to record Fay Grim? Not the TiVo's suggestion feature, that's for sure. It was a combination of cool casting including Nikolai Kinski, Parker Posey, and Elina Löwensohn. Thanks, you guys. When I get a chance to watch this flick several more times, I'll be sure to add another fav actor/actress to my must-see list of films I haven't seen yet.