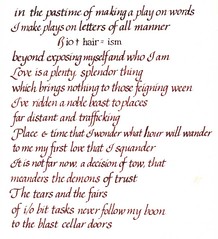 bio_theorism-76534329@N00
THUMBNAIL
There was this one newspaper article I read years ago by Amy Wallace that I never stop talking about because it's the story that turned me on to her investigative reporting. It had something to do with agencies, which to me translated into temp agencies, but to her vast readers probably meant entertainment industry corruption. Anyway, I searched out her news stories using the L.A. Times newspaper database until I learned she'd moved to New York, then back to L.A., then quit her position with the latter as Deputy Editor for Portfolio dot com. It's been months, maybe years, since I've read anything by her.

When she was Deputy Editor, I mostly tried to read the articles published in the Times' biz § by the various journalists who may (or not) have forwarded their submissions to her. There was Abigail Goldman, Richard Verrier, and various others. I became so familiar with the biz § of the L.A. Times, I find it hard to not peruse that section whenever the opportunity arises.

It's boiling down to cable vs. telecom

I like exposures like this article on the competitive practices some companies base their expertise on by investing in advertising ways to appeal to new customers. Ways is right. Guays for a lack of better spelling because what they don't reveal to the consumer is that these corporate entities are scheming ways to steel their competitor's business by winning over their unhappy customers. In other words, neither one of the corporations battling each other this way could care less about what their customers want. As the saying goes, "if they aren't happy with the service they can go with a different provider". What matters most here is that the business plan sound sane, customer service be damned. The customer is always wrong seems to be today's corporate slogan.