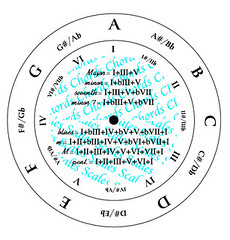 pinwheel-76534329@N00
THUMBNAIL
I guess I haven't tried to put some thought into finding a craft that I can make that might turn heads and earn me some petty cash because it just seems so boring. I mean, the creative process is fun and all, but once a product is developed, for which there may or may not be a demand, then it's all routine. Make more products. Keep accurate books, network, ugh. Anyway, I came up with this little pinwheel thingy. I picked it up from a book on teaching myself music theory. It's been helpful in my attempts to learn to play guitar. It's really self explanatory. The chords and scales are designated in roman numerals in the smaller center circle. Once you know what you want to play (Major chord, minor chord, etc) you just match the numbers with the letters in the outer circle.

I made myself one of these by hand. That is, no computer printer. Although my calligraphy can never match the crisp, sharp lettering on this digital version, I do use permanent, water-resistant ink for them. There are plenty of active calligraphers who'll tell you that they format their designs on the computer before taking ink to paper so that they'll have an idea of proportion and positioning. Well, I think this digital version didn't come out half bad, so

This is how I spent my 4th of July weekend. I decided to pick up my guitar again and start writing a song. I don't think that's possible for me to do, however, so I settled for learning to play a Beattles' song called Michelle mabelle. Of course, once I've learned to play this on a guitar, you bet our cahonies that I'll be making it more pleasing to the discerning metal listener. It's the only way I know to learn theory—by converting an old classic into heavy metal. But I don't know if Michelle mabelle is the right song for this type of objective. Oh well, at least I'll get some chord practice in…