Finding things to do when SAG strikes 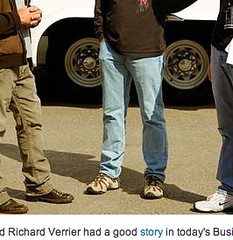 You can bet your bottom dollar that the first few decades dawning the information age will hardly be duplicated again if capitalistic ingenuity has anything to do about it. That's the way I feel as I've come to understand the judicial ordinance after judicial ordinance in rulings regulating digital media.

❝But for those of us in the audience, I can't say I'd shed a tear. ❞

It first came to the public's view when Metallica griped about Napster's role in copyright infringement. When I was an adolescent, I had dreams of a creative career too. As most artistically inclined people know, copyrights have major importance in the pursuit of an entertainment career. The interpretation I had back then was more literal in that copying verbatim from an already published article was prohibited. Yet quoting a portion of copyrighted material is OK as long as one doesn't read off of crib notes. And before I owned a decent computer that could convert music to MP3, I too was supportive of musicians demanding a little respect, but as soon as I got my PC and stuff to build an MP3 library, I changed my view.

Then there was the WGA strike. They too wanted a piece of the action. Now there's talk of the SAG striking in July. However, if one mixes a little bit of first amendment rights into the mix, my opinion is not for or against creative people as it is against production conglomerates.

It's gotten so that big media news corps are considering the hinderance of hotlinkage to their online articles. The motive for this is undoubtedly bloggers with an inkling to grab feeds from various news sources to highlite their own web page. I guess what journalists are so concerned about is the use of their words without their permission. Like me quoting here from the Richard Verrier article†

… contingency plans for a strike that would enable filmmakers to continue some work on movies, completing special effects that don't require the use of actors, for example. But halting production for an extended period would be costly for the studios and jarring for the hundreds of actors, crew members and post-production technicians who would suddenly find themselves idled.

… except with a bit more pizazz as computer nerds‡ know how to use dynamic html to incorporate this characteristic into their css.