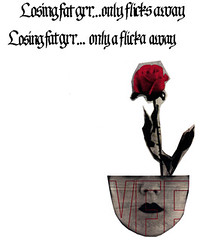 One of the most digusting things about killing a pesky fly is splatter. That's why I'm totally against fly swatters. If the gesture of the middle finger had any relevance to the phrase "drop dead", it is certainly conveyed in its purest form while flicking, as opposed to flipping.

A direct bulls-eye may cause a messy demise for a fly. Under scrutiny, the splatter which usually exits the posterior is not poop, though I imagin fly poop looks about the same. Whatever that guey, slimey white stuff is, it moves. Microscopic tiny organisms crawl. Perhaps they are lice.

You might deduce that such nastiness might be larvae, but flies do not carry their young after they're hatched. They lay their eggs and it's done with. Somehow I get the impression that fly membranes are composed of little worms in armory. It must be that I feel this way from my younger, sadistic self when burning ants with magnifying glasses seemed like a good idea. Well, I'll never forget one beetle-like critter (perhaps it was a weevil) that completely crawled out of its shell and began to inch away like a worm, or a maggot.