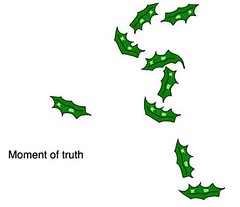 Growing up on the ranch, as I like to call it, was quite depressing. From time to time, I was handed the responsibility of mowing the lawn. With that little task came weeding the two palm trees of grass, a job I detested because that area was always prime for passing dogs.

Probably the worst thing I had to do, which I often postponed until my dad would lend a helping hand, was to trim the holly tree. I don't care how thick and leathery the gloves I wore were, the thorny leaves always managed to pierce through them. And I hated pain too.

I may have uploaded a short rhyming passage about falling leaves and how I find myself waving arms at them like a lunatic trying to catch them before they hit the ground. It isn't as if I hang out under tall trees waiting for a leaf to fall. I just spot them sometimes as I happen to be walking by, a quirk developed from butterflies that sometimes seem to have an attack regimen in their flight path, and if barely caught through the side of your eyes, might appear to be a bat or a gigantic bumblebee. Leaves falling in front of your path are less stressful.

Would I still feel the same about trying to catch a falling holly leaf? Hell no! Those dried up leaves can become stiff as an iron plate. And the thorns on them are a precise as needles. Why would I want to catch one of those? For pain? Oh yeah. Pain. Then, after I manage to puncture a bunch of tiny holes in my hand, I can draw on the pavement a smiley face.