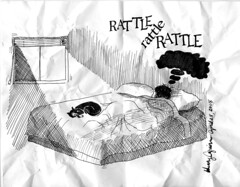 As much as I appreciate numerology, I'm not the type to obsess over it like a superstitious person who can't leave the house without reading their horoscope. So when I saw that Direct TV was airing Number 23, I thought it might be interesting. I was wrong. But, I still sat thru the whole thing.

Another film I didn't think I would enjoy, was A kiss before dying. Desperate for anything, I decided to sit myself down like I was about to watch Derailed again. Surprisingly, it was much better. This movie even felt as though it were poking fun at life during the pre-cell phone era. The dialog sounds nineteen-seventyish and the technology seems grainy.

After a bit of insight from IMDB, I discover that various scenes were done in tribute to Alfred Hitchcock greats like Psycho and Vertigo, among others. One scene that I found entertaining depicts a typical San Francisco two-story house structure where the main character lived in his youth. His mom is having tea when a freight train rumbles by and she comments on how loud they are despite getting use to it. Then, if we may cut to a chase scene, the pursuit ends near the tracks along side trains going in both directions. It is here that I wonder about the mother's line commenting on the noisy trains, because, as a child, I was always taught to look both ways before crossing the street. Because that concept applies to crossing railroad tracks too, it seems that the risk of not stopping to look both ways for clearance attributed the scene to a fast living, head banging, nearly deaf rocker. However, watching this scene again, I could see how one train going in one direction might drown out the sound of the other train going in the opposite direction. Yet, I insist that the diesel engine of the hidden train makes far more racket than the tail end of the train headed in the other direction.

That's all. It just makes me wonder whether another Hitchcockian theme was in the works here.