extraordinary stories of a young person of suburbs 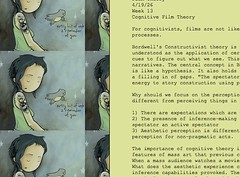 In the course of websurfing, I sumbled onto

her_lens_flared's blog. She has an entry called Yay finally non-bs film theory which caught my eye for two reasons, first the letters BS and second, the subject of film theory. It's hard to deter from straying during the course of researching the web for interesting reads on the subject, because I also like to read between the lines. In this colorful clip of JPMeyer's blog, I found interesting how she maneuvered the quantity of entries to display, the footer that reads how many previous entries have been backtracked, and the use of a monospace font. It design as a whole gave me the impression of a screenplay, with the subject line giving the effect of a scene heading.

Little voices in my head tell me how wonderful it would be to overhaul my blog's stylesheet and get it to look like hers. After this fit of creativeness subsided, I began to read her entry. Because it doesn't seem as thought JPMeyer is contributing to her blog anymore, it doesn't seem worthwhile to add her as a friend. However, for the sake of this entry in particular, that it doesn't get lost in cyberspace, I will include it here.

Bordwell's Constructivist theory is of cognition and perception. Perception is understood as the application of certain mental schemata upon certain visual cues to figure out what we see. This is carried on further onto things like narratives. The central concept in Bordwell's theory is the schema. The schema is like a hypothesis. It also holds a network of associations, which also allows a filling in of gaps. "The spectator comes to a film already attuned to apply energy to story construction using prior knowledge and experience."

Why should we focus on the perception of movies when these practices aren't different from perceiving things in normal life?

1) There are expectations which are unique to film
2) The presence of inference-making in film are such that they make the spectator an active spectator
3) Aesthetic perception is different from everyday perception in that we use our perception for non-pragmatic acts.

The importance of cognitive theory is that it draws attention to important features of mass art that previous critics and writers had completely ignored. When a mass audience watches a movie or tv show, what are they interested in? What does the aesthetic experience consist of? Often, it is to have one's inference capabilities provoked. The goal of art might be "to find the deep meaning" to some people, but with this perspective, you can't appreciate mass art. Mass art, instead allows for the engagement of our perceptual repetoire.

Bordwell has been criticized by cognitive theorists on the grounds that whether or not a theory-based perception of cognition is incorrect because it makes cognition and perception seem like higher-order mental activities that require concious activities. One does not need to think about the image of a chair being a chair to recognize it as a chair. Also, the scope of his inference is too broad.

It's a theory of agency, but much of it consists of inferences that the spectator isn't particularly aware of. Or, it has too many exceptions. We might see Jimmy Stewart in his garden, but is he gardening or burying a body? However, we see that he's Jimmy Stewart and don't have to think "I wonder if this is Jimmy Stewart". Logically, you cannot have an unconcious inference. Thus, it's also not logical to say that we always have to form hypotheses while watching them.

The suyzhet are the "clues" and "pieces" of the narrative while the fabula is the constructed (both currently and retroactively). There are however gaps in the suyzhet, which the spectator is required to fill in (for instance, cutting from a baby to a teenager). This looks good on the surface, but it keeps causing gaps to be filled in no matter how much suyzhet is given and thus there is never a complete narrative. Therefore, how then can we tell that everyone is creating the same fabula? The actual times when we need to fill in the gap are when the gap is made explicit, like in a detective movie. In the end, there is no need for a "theory" of fabula/suyzhet at all.

Identification in psychoanalysis is based on the assimilation of self with other. Carrol (and to a lesser degree Smith), create a spectator against this reductive/essentialist concept by making the spectator one who responds to the film rather than merging with the film. The spectator pities a character who is upset, rather than becoming upset themself.

How is it that we can have these intense responses to something that we know are fictions? Psychoanalysis doesn't explicitly answer this, although Metz uses the imaginary signifier here to explain this. Cognitivists (Carrol and Smith) give the answer that our responses to visual fictions come from the fact that we imagine their contents. Currie gives the more sophisticated explanation through the simulation model. Here, we can use our own mental processes to draw conclusions based on how other minds are functioning.