Some time last week, the NBC nightly news (Tom Brokaw) aired a segment on the goldmine before the desk of editorial cartoonists in this country. I enjoyed the story as much as I still have dreams of growing up to be Mike Luckovich. Equivalent to my virtual desktop is a photo of the office where the political caricature satirist Mike Luckovich reports to work every day. As you might notice, there is no PC on his desk, unless it is buried under all those papers. One wonders how much more better the editorial cartoons might be if media issued their artists web access. 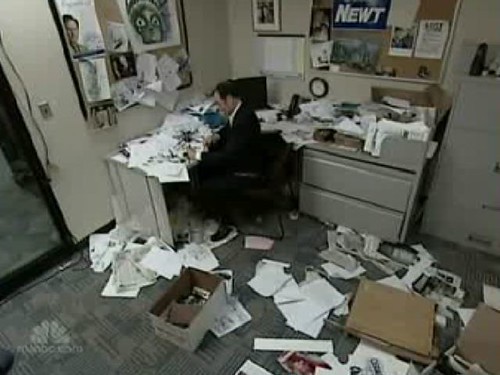 I dunno about dressing up for work in a suit and tie. I have an alchemy tie pending shipment from the UK as a matter of fact. It's been about twenty days that the order has gone thru, and no delivery. Hmn?

I wouldn't mind dressing up a bit gothic if I had to wear a suit. Vampires are in, just consider the new drama series due out September, True blood. How could a cartoonist not want to come to work dressed funny? I can only wonder if it's a economic thing. Perhaps a splatter of ink would ruin a shirt that cost twice as much. It's nothing an apron wouldn't solve. Come to think of it, more emphasis should be placed on aprons in gothic fashion.

I am brainstorming a new illustration, but I haven't even checked IF`s word of the week. Perhaps I'll do that now (after I pay my bills).