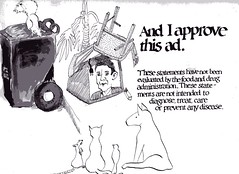 Growing up, I so dreaded the chore of pulling weeds from the palm trees growing out front on the sidewalk. The only think I would think about was the numerous dogs that must be walked up and down the street by their owners and the urine. The only thing more disgusting are the radio ads I hear for people who are concerned about being full of shit. Everclear has a web site for it's product with photographic proof that the feces it helps to remove from a person's digestive system is indeed stuck on our intestine walls. The photos of human stool are the shape and structure of intestines.

I stumbled onto this when I googled the word "disclaimer" for the dialog used when an ad (usually on radio) uses a speed talker at the end of it describing in legal jargon what the seller does not claim responsibility for if a consumer buys its product.