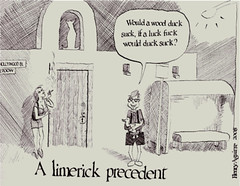 13th January, 2008 ©
Today's blanket sin
This year, the Golden Globe Awards were cut short. From the films that won anything, only three or four are films/shows I've seenn and tune in regularly. There will be blood earned Daniel Day-Lewis some recognition for best actor, Into the wild won an award for best original song "Guaranteed" by Eddie Vedder, Tina Fey got some recognition for best Actress in a comedy.

The losers, which I've either seen or wanted to see or tune in on a regular basis, are Adam Beach from Bury my heart at wounded knee a mini-series or motion picture and A wolf films/traveler's rest production. This film was beat by Longford and Longford's Jim Broadbent. The office loses an award for Steve Carell to David Duchovny, from Californication. The award for best comedy was given to David Duchovny instead of Alec Baldwin too. Extras took the best TV series award—hm, I think I've been meaning to watch that—instead of 30 Rock, but a bigger disappointment for me was when Jon Hamm, a Mad men actor, won the award instead of Bill Paxton of Big love. In fact, Big love and House both lost to Mad men for best TV series drama.

I wonder if Sean Penn's divorce might've seen Atonement winning best score coming, because the interview he did with LA Weekly sounded like he felt indebted to Eddie for his contribution to the film. It is sad about the break-up, but I'll be damned if I just let news like that flutter off like any other Hollywood marriage. If I can't hear about the details, then I'm going to make up my own.

I thought Michael Clayton would've won best motion picture, and it should be interesting to see Atonement, American gangster and Michael Clayton battle it out on the Academy's, but I'm still angry about the parts Catherine Keener is getting in film which don't seem to win her some kind of award. I guess it's not too late for her to win and Oscar for best supporting actress. We'll see, but I still think An American crime was totally sabotaged.