A co-worker here at the worm hole showed me the front pages of the newspaper. I been watching the TV news reports on the rioting as a result of the assassination in Pakistan, but I don't know if the the picture in today's front pages were of the 22 victims who suffered from the suicide bomb blast, or whether it`s a result of rioting people who may have also perished. I don't know why pictures of dead people dying violent deaths seem to always have their pants down, or unbuckled. It's like, do they feel trapped underneath their clothes, or that they're too tight at the waist? I'm almost certain that bystanders don't go around pulling down the pants of corpses. So what is it about the human psyche that impels people who know their doom is near to unzip their pants? 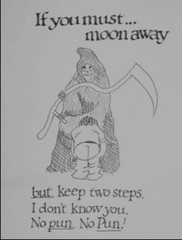 I know my cartoons are in bad taste. I seem to have no morals anymore. I'm sorry.

That project involving Internet bookings totally just scrambled my brain. Zeke kindly walked up to me as I was trying to figure out what was wrong with the computer and said, "Get off. I booked this one." So I did as he said. Next morning, I talk to my boss about how it's so unfair that each person who checks out something must present their own ID card, but when it comes to booking a computer, they can use whatever card they please. The discussion got so hot that I developed a pain in my side like a mouse burrowing from inside my gut trying to get out.

The boss makes a convincing argument. She says "The adults…" blah blah blah blah. When you look at things from that perspective, I have to agree that it's nice to have little punk teens running around picking their noses and using the keyboards without washing, eating cheetos and not washing before using the `puter, scribble on the walls and raise a ruckus of noise just to disturb the readers. So so cute.