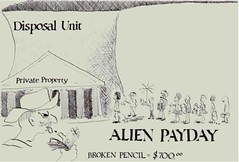 20th December, 2007 ©
Today's blanket sin
I have to draw something on the property issue. I got somthing lingering in my head about that, and media's view of the lost cause/lost war. In a nutshell, it's this: why broadcasts would describe the US war against terror as a war that's being lost should then be lowering proprty value as a domino effect. It's like the idea that a sub clerk once told me just after the airplane hijacks. "The flight tickets are really, really low right now. You can't find a better bargain to fly around the world right now"

My concern on the real estate issue, though, has much to do about family life, and loveless marriages. I dunno how to incorporate that into a cartoon. I should just quit before I get a headache. It's late.

Breakfast at HOP was good. The hashbrowns were really crunchy, and they've got espressos now. Last I remember, HOP didn't have espressos, lattes, etc. The waitress kindly informed me that they may run out of espresso and that might be reason for not offering it. How do you run out of espresso? Hmmn?