The madness of screenwriting 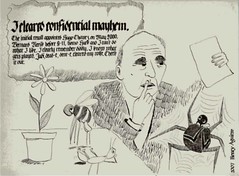 9th December, 2007 ©
Opening scene describes a life in an office atmosphere. The main character is OK looking but he has character flaws. When speaking to people, he makes no eye contact. In fact, he sees right through you, sometimes even jerking his head to catch a glimmer at the goings on over your shoulder. That's not to say, however, that he's a loner.

What happens at work, stays at work, and when it's time to go home, then his life seems boring. I need a picker upper scene here. I figure if a nice looking co-worker pays him a surprise visit and has sex with him, that should hold the audience. In the morning, he goes through his routine for preparing for work. At work, he develops a terrible headache from meeting a new employee.

Since this is getting boring, I figure I'll just give the guy a stroke.

Nobody cares about him (at least not the reader of this screenplay/the audience of this movie) because he's temperamental. He gets angry and throws things at walls. Issues that the audience want to know about, but too late, the dude is in the hospital trying to recover his stroke.

Incidentally, we'll call this guy Peter for now. Maybe even Mr. Peters. I think it might be interesting to call this character Peter Peters, but not so obvious that a scene is dedicated to it for a laugh. The audience will have to put one and one together. The new girl is Selma. She doesn't feel in the least bit guilty about Peter's stroke because it didn't happen like "Ooh, how do you do? My name is Peter. Aw god, I have this splitting headache." **PLONK**

Besides, Selma works freelance, so she probably doesn't even know he's in the hospital. Emily, the gal who shagged him in the opening scenes, was not a co-worker but a client of the company where Peter works. He kinda just got friendly with her. Donna, a delivery clerk, does work with Pete and also has a crush on him. They're good friends as women can maintain without telling a guy she lusts for him. Pete doesn't know about the crush, or if he does, he could care less. He wants Selma.

Donna's a nerd (or geek. whatever) and does some really awesome things with a computer and Internet. For now, she just scams a swindle collaborating with google maps (or mapquest, whoever cuts the better deal). She gets Pete involved and now Pete freelances as part of a tagging crew.

Things get weird in that a church is involved, a trip to Baja California, a secret about Pete's emotional stability, blah, blah, blah. What happens is Pete can't remember how he feels about Selma because of the stroke. Or something like that, because it was the actual conversation with this "goddess" that puts him in the hospital. Now, part of his memory can't remember things straight and for all he knows, he's gay.

After he reaches a full recovery, he's allowed back to work. He dies the craziest death, drawing a final glyph with his blood. It's all he can do to send signals to Selma who he cannot seem to locate. Selma sees the glyph in blood which actually happens to be symbolic for her. She had a boyfriend in her youth with whom the glyph symbolized something special.

She happens to work as a journalist and she got the call from work to cover a story about a dead guy. So she's there trying to figure it all out when it's discovered that the blood on the pavement forms a symbol of some kind when viewed from the air. Selma doesn't know this because she's just trying to get the story about the death/murder/suicide (whatever). About a day goes by and she sees the same story she covered on the news from a different network which approaches the incident from a different perspective, the air. Selma almost has a breakdown as she realizes that this is that guy. That motherfucker who broke her heart back when they were kids.

His death is martyred in a way by his new homeys from the tagging crews he rolled with and now his (and Selma's) secret symbolic glyph can be seen every spring atop skyscraper buildings that grow gardens on the rooftops. From a satellite, people can look at hundreds of building across the nation with colorful, flowery glyphs.