Although I'm tired and ready for bed… 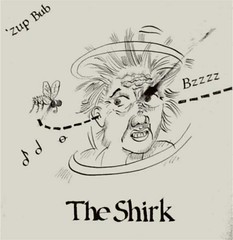 © 6th December, 2007
Today's blanket sin
Some rain would really be soothing to lull me to sleep. Oh man, those damn kids gave me a headache today. And then, WTF came over me to let the damn door chime ring for a straight ten minutes thinking it would get on the nerve of those kids more than it would bother me. I came home ready to kick my feet up on the couch, remote in hand, and watch my favorite show: the news.

Instead, I flipped thru my TiVo collection of new stuff and sat thru another segment of Session 9 before a commercial interruption prompted me to come to my senses and do something productive. I loaded the DVD player with My summer of love, a film about gay love. I couldn't quite place the title and why it seemed like it was a must see as if I'd read it in one of my how–to write books. Of course, it is a classic novel that I may or may not have been wanting to read. The movie is always better for these types literary work. It saves so much time. It would be nice if I could read a book that size faster than watching the film.

It is a nice story about two girls. They are young and probably hormonal, but I just thought they were attractive. I saw the film Super bad for the first time the other day. I thought it was too long, but it made me laugh. The dialog in that film really only seems to manipulate viewers to laugh at their own insecurities whereas Summer of contains the same concept approached from a different angle. Both films might be seen as stories about getting laid. Why, then, is it that the story about guys trying to get laid is made out to be a comedy, but the story about girls getting laid is about love? For starters, let's analyze this through SLAVEZOMBIE's eyes. In the scenes of Super, is the camera angle possibly the POV of a fly? or do you get the sense that you might be dead and reviewing your own life before your maker passes judgment? It cannot be the latter because Super bad follows the lives of two high school seniors about to graduate and some scenes contain one of the graduates without the other. So, that nails down SLAVEZOMBIE's evaluation of what the director is making his audience out to be—musca domestica.

Summer of love contains a prominent exchange of vows between two lovers that may qualify as the precursor to viewing the movie with the idea that one is dead. That doesn't mean to say the film is in any way droll. Some scenes in the film also contain characters that couldn't possibly know what the others were up to, if it`s the main character`s life that is flashing before our eyes; but the story structure is made in such a way that the conniving actions of brother and sister, lover and user, could be interpreted as unexplained. After all, even the dead come back to life in Summer.