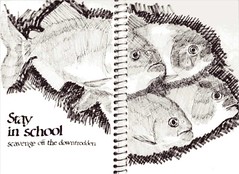 © 22nd November, 2007
Today's blanket sin
I had a really good idea for a panel strip about a copy who was dealt with for doing something unethical. The judge passed a sentence of an entire day with a pipe up his ass. When the cop had to pass gas, he went to a public restroom and removed the pipe and farted. Because his morals were being tested, he didn't re-insert his pipe. Needless to say, his strut changed mildly and it was discovered that he cheated on the sentencing and was given a harsher punishment. The judge gave him the option of one year in prison, or one week with the pipe up his ass.

It was supposed to be funny because of the way law enforcement tends to strut their stuff when they walk. However, I decided I would be contradicting my own set of values by placing myself in such a violent situation (living in Hollywood without police protection). Regardless of my opinion of the manner in which the boys in blue seem to glide over the ground they walk on, I just don't feel I have it in me to convey this concept (yet).