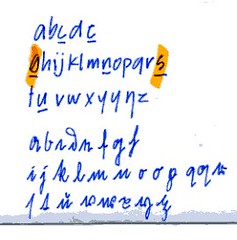 17th November, 2007 © BS " teenyboppers "
I've been trying to capture the cute way my cat shakes his leg to rid itself of the bandage he has for the claw the doctor pulled out, and the toe a squirrel bit.

When I finally had him, Figaro, in position to shake away, he actually managed to rid himself of it. I let him lick his wounds certain that the anti-biotic ointment was all gone and he wouldn't get sick from it. It still looks raw as it was only yesterday that I took him in to see Doc Fern at Waferer. I ripped up some rags, applied some more ointment that the doc gave me, and taped it back up. Anything the doc can do, as far as mummifying things, I can do too. Maybe better.

I stopped getting the cat to pose while shaking it's leg. I'm just going to walk around the house with the camera in motion picture mode and see if I can get him a la natural. It is kinda sinister to get cute images out of such a grim situation. I have to wonder what the squirrel is doing right about now, though.