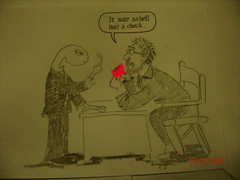 campaigns
blanket sin doodles.
I envisioned an elaborately structured entry designed for the avid readers in LA who frequent their public libraries, but I'm too lazy to do all that. One of the things most book fans know about around Los Angeles is the ability to request a book title which is not at their local library to be delivered for them. These holds, as they're referred to in library talk, contain a "pink" router slip which really stands out, but many peeps with the biblio system of LAPL are in the habit of recycling them over and over again. I'm usually the opposite and prefer to leave the pink slip in the book in case the reader is in a hurry and doesn't have time to figure out what they'll be using as a bookmark.

Anyway, to make this short(er), I've come across a few people that borrow their books in stacks making it impossible to read each one in the short 3-week period allowed. In case you don't already know, it is possible to get a renewal for another three weeks, as long as the book in question isn't being requested from somebody else. So these patrons, as they're known in bibliophobic LAPL speak, renew their books either by phone or on-line. When they've reached a total of two (or three) renewals, they can't renew anymore. That's the max. To get around that, and not have to wait for the book to go back in the delivery to the owning library, then back again (in the deliver) for pick up at the patron's local branch, some patrons place a hold on the item all over again (before returning it). This technique totally mixes us poor clerks up and forces us to override the 3x maximum renewal rule.

I don't know how many people who pick up their books, arriving from different libraries, notice whether or not the pink slip is left inside the book for the patron to use as their own personal bookmark, but it would be exceptionally cool if peeps got in the habit of requesting their holds thru the library's website before returning an item so that pink slips galore will be placed into the book and the book placed back onto the "hold" shelf for them to check out again. This way, I will feel so much better about the lack of photocopying skills some city employees have that force them to recycle these little, pink, router slips.