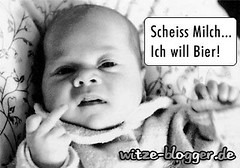 Cutesy
blanket sin doodles.
What's in a name? Earlier this month, I went to a zine fest and took in a workshop. When the participants went around one at a time expressing a little about themselves, I felt weird introducing myself. I stopped using the name "Henry" when I finally got fed up with informing people over and over again what I prefer to be called (which reminds me every time I hear it of the crucifixion and the epitaph INRI); so I chose "Bier" as my lj pseudonym.

I'm currently in the verge of changing names of characters in my screenplay. It's very likely that I'll be using Bier. I thought this was the cutest baby picture I've seen in a long time and simply had to share it with you all.

For those who can't figure out how to translate, the caption says "I don't want no stinking milk. Give me a beer!" Smart kid. Anyways, on a lighter note, I stumbled onto a story from Germany explaining a Fox epidemic. It seems these critters can bring havock to humans in the form of echinococcosis, similar to jaundice, curable thru chemotherapy only. You know what that means, don't you? It means dozens of people might be losing their hair (if epidemic were more widespread) due to foxes carrying tapeworm eggs in their feces and bringing them into the city. Why is that important? I always thought being a vampire would be cool for hallowing but never so much as to shave my head, and I don't believe in stereotype dracula vamps. When I saw the movie Nosferatu, a film about a bald vampire, I changed my opinion about vampires, as long as they're bald and ugly.